Washington's Crossing, designed by Roger Miller and published by Revolution Games, finally made it to my gaming table a short while ago. Prior to that, I had pushed the pieces around a bit, engaged in a few introductory game turns with other rookie opponents, and spent some time reading the rules. But I had not played a competitive game nor spent any time analyzing it solo. All I can say now is that I'm sorry I waited as long as I did to get involved in a competitive game!

It's a fantastic design, dripping with period flavor, and presenting the type of challenge that many grognards enjoy. It's not a "blitzkreig" type of game at all, but rather a contest of maneuver and skill. Resource management and Risk management are the watchwords of the day when playing Washington's War. You must be cautious enough to not exhaust your troops, but audacious enough to know when it's time for a night time forced march into a pitched battle at dawn.

I could go on and on, singing the praises of Washington's Crossing, but that's going to have to wait for another article. In this article, I wanted to address the one (minor) fault that I find with the game: the bookkeeping and battle calculations that take up so much of a player's time. Apologies to the folks at Revolution Games, but I promise I'll get into the good stuff in my next article.

This article will address the aforementioned fault and describe the Game Assistant program I've designed that will allow you to play the game more quickly, with much less liklihood of calculation errors, and with zero of chance accidentally dropping the rule book near the Leader Chart and watching half your Leader strength and Fatigue markers scatter across the table (not that it actually happened to me...) I'm assuming that you're at least somewhat familiar with the game and therefore will not get into much detail about gameplay.

The two basic problems that I'm attempting to address with my program are:

The Leader Charts do an excellent job of condensing the amount of space required to track each Leader, his current combat strength and Fatigue level. Each Leader has a column of boxes marked 0 through 9, a 10's chit, a 100's chit, a 1000's chit, and a Fatigue level chit. You use the 10's, 100's and 1000's chits to record the number of troops present with each Leader counter on the map. With these 3 chits any number of troops, from 0 to 9,990 can be recorded, in increments of 10. The Fatigue level, which can range from 0 to 6, has a separate chit that is placed on the Leader's column as well.

This is a clever way of recording a lot of information in a relatively small space. But the end result still falls short. The chart is crowded and it's a very common occurrence to have the chits get jostled or misaligned, and end up stradding two different Leader columns, which can get confusing. As you can see from the chart graphic, you can easily make a mistake and read the wrong column, or juxtapose a 10's chit for a 100's chit. And that's with only 5 Leader columns on display. The American Leader Chart contains 22 Leader columns!

Washington's Crossing relies on the honor system, since neither player is allowed to look at the opponent's Leader Chart. So I think it's important to make it as easy as possible for players to accurately and faithfully record their numbers. 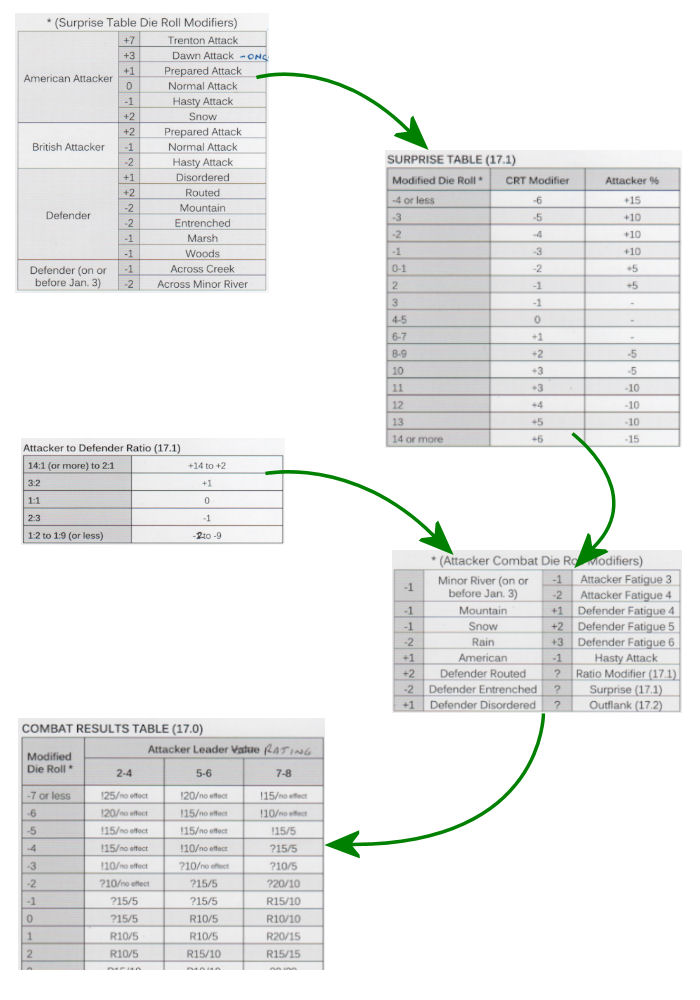 In order to resolve a combat, you must follow a number of well-defined steps. What I'm going to focus on are the chart inter-relationships. You must roll on the Surprise Table Die Roll Modifiers chart to get the modifier that will be applied on the Surprise Table. A modifier that's based on the Attacker to Defender Ratio is calculated. Then both of those modifiers are fed into a final CRT Modifier table which also applies another modifier for attack type, terrain, fatigue level, etc. This final modifier is applied to the actual combat die roll to render a combat result.

I'm not going to pretend that any of this is mind-numbing rocket science. It's all based on simple chart cross-referencing, addition and subtraction. But when you're trying to determine the best method of attack, which leaders to include in the attack and which to send on flanking maneuvers, etc., to have to keep tracking through these combat-related charts as well as the Leader Charts can be a chore. "What if I leave Glover out of this attack? What will the odds be then?" "What if I perform a Prepared attack instead of a Hasty attack? What will be the new range of possible results?"

I found that all this chart/table checking added an enormous amount of playing time to the game. But, as I said, these calcs are all fairly straightforward, so I thought they would be prime candidates for automation.

With that in mind, I quickly spec'd out that formulas required to duplicate the combat calculation process. In addition, I decided that my program should store the current Leader Chart information, thus eliminating the Leader Charts entirely.

I find Excel to be an easy tool for prototyping programs, even complex ones, as the user interface is already built in and it's ubiquitous; just about everyone has Excel. Following my specification, I created the program entirely in Excel, and present it to you here. It is not a professional quality program by any means, so don't be surprised if you encounter errors here and there. I'm hoping that enough people will use it and like it enough to help me create the final mobile version by identifying errors in the program calculations or functionality.

Please download the Excel-based ""Grognard Game Assistant for Washington's Crossing"" by clicking on the Excel icon.

I'm considering building a mobile web based version of this program. Once it's up and running on hand-held devices, it will be really convenient and useful, I think.

Let's take a look at the "Americans" sheet of the workbook. On the left side is a list of every American Leader and pertinent stats: Leader Rating, Maximum Troops (Command Limit), Current Strength and Current Fatigue. Only the Current Strength and Current Fatigue need to be updated by the player. The other values are (mostly) static. Using the program is pretty easy.

When you're ready to go ahead with the attack, ask your opponent for the actual values, then update the yellow cells one last time. The "Final Combat Results" section will fill in with the actual combat results to be applied, including:

I hope you find the program useful and that it enhances your enjoyment of this great game. After working the kinks out of this program, and assessing its usefulness, I'll make a determination if it's worth the effort to create a polished mobile version. I'll greatfully accept any feedback about the program. In the meantime, having to plop my laptop on the gaming table in order to use this tool is not much of an inconvenience, especially since my little laptop takes up less space than the Leader Charts that were made obsolete by the program!

I'll be following this up in the not too distant future with a review or strategy article for Washington's Crossing that demonstrates the 98% of the game that does not need any fixing or adjustment.