Stalingrad: Inferno on the Volga

Alone Against the Soviets

Last weekend, I sat down for my first session of “Stalingrad: Inferno on the Volga”, designed by Emanuele Santandrea and published by VentoNuovo Games. Stalingrad is primarily a solitaire game, designed for a human player to control the German forces and an Artificial Intelligence (AI) rule set to guide the Soviets. There are separate rules that allow for other configurations, such as a head-to-head two player mode, but it was designed as a solitaire game, so I decided to try that first.

18 game turns and about 30 minutes later, my Germans suffered a humiliating defeat without even coming close to securing the required victory objectives. The game system is broken, I thought.

So, I decided to play again.

33 game turns and about 90 minutes later, my Germans had to accept defeat after coming within a hair’s width of taking down the entire city. A much more historical result.

But which game was a fluke? The miserable German failure of the first game?  Or the “Soviets barely hanging on by their jagged fingernails” of the second game?

So, I must play a third game.

But first let me talk a bit about the solitaire game itself.

The “Stalingrad” map is a work of art. I remember hosting a video interview with Emanuele back in December of 2017. That was when everyone got their very first peek at the map. The components are all beautiful and the quality is top notch. We’ve come to expect that from VentoNuovo, so I’m not going to dwell on that in this review. This is not going to be a re-hashing of the rules either. That’s been done several times, so there’s no need for me to do it again. This article is more about the experience of playing the game.

“Stalingrad” is a block game, as is common for VentoNuovo. There’s no better way to capture the “fog of war” than to use blocks, which are hidden from the opponent’s view until it’s time for combat resolution. In solitaire mode, the “Stalingrad” rule set is pretty straightforward. You deploy the Soviet forces according to a somewhat randomized initial deployment schedule and reinforcement schedule. Next you deploy your German forces with a fixed set of units deployed to the map, but a randomized reinforcement schedule. Then you’re ready to begin the game, starting with a German turn and then alternating back and forth between the Soviets and Germans until the end of the game.

Overall the rules are clear and simple, freeing the players to concentrate on tactics rather than constantly having to refer to the rule book for clarifications.

From what I have seen so far, the possibility of eliminating *every* Soviet unit on the map seems pretty remote. As does the possibility of having 10 German units eliminated if the German player exercises reasonable caution. So, the real contest appears to be: can the Germans capture all 6 Soviet Spawn hexes before the last card is drawn from the Soviet deck?

Both Soviet and German cards are used in combat. But note that the victory condition does not say “when the last Soviet card is *used*”; it says, “when the last Soviet card is *drawn*”. While only 1 card can be used per combat, anywhere from 0 (zero) to 7 cards can be “drawn” into the usable Soviet deck in a single turn. There are only 28 cards in the Soviet deck, so you can see that the game can end quickly given the right circumstances.

Here’s a breakdown of the number and timing of Soviet cards drawn during my first 18 turn game:

The Germans barely had time to get to the outskirts of the city in force when the game ended!

The Germans have two basic “Action” options each turn: Move/Attack or Reinforce. There are two different types of Move actions and two different levels of Attack actions that allow for different degrees of speed or power concentration. The “Call for Reinforcement” action is simply a random deployment of new German units.

Due to the Soviet card draw victory condition described above, the time pressure on the Germans is incredible! Ideally, you’d like to call for reinforcements every turn to bring the maximum firepower to bear against the entire city. But there are 3 problems with that approach:

The temptation to press ahead with your German troops is strong, even as they weaken due to combat losses, hoping they’ll have enough strength left to take the objective hexes.

The Soviets, being governed by the game’s AI, have more limited options: Move or Spawn (i.e. Reinforce). The net effect of the AI is that large clusters of Soviet units will build on or near the 6 Spawn hexes, then movement will disperse the clusters throughout the city, then clustering will begin again. Soviet attacks are incidental, occurring only when movement takes them directly into conflict with nearby German units.

Whether attacking or defending, the Soviets can play a card to influence every combat they are involved in. The cards contain all kinds of nasty surprises for the Germans, including triggering the draw of additional Soviet cards which hastens the end of the game!

As the Spawn hexes are captured by the Germans, Soviet reinforcements slow to a trickle but movement and accumulation of “drawn” Soviet cards continues unabated.

How “Stalingrad: Inferno on the Volga” Captures the Historical “Feel”

Certainly, in my second game, I felt the same frustration the German command must have felt as they threw everything they had into the battle, but just could not compel the Soviets to surrender. I thought I was doing so well, but time and time again, I failed to secure the victory objective hexes and had to go through the slow process of bringing up fresh reinforcements to try again.

I’m going to layout an example that demonstrates how the game system and, in particular, two Soviet cards bring about these conditions. 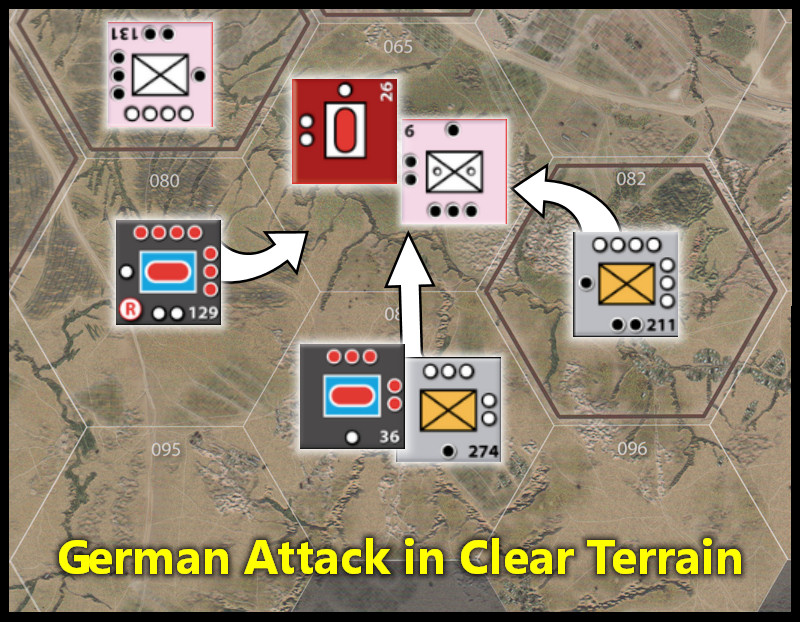 In the early stages of the game, German units will first encounter Soviet units defending in Clear or Rough terrain which offer no defensive advantage to the Russian. In our first example below, the battle will play out as follows: 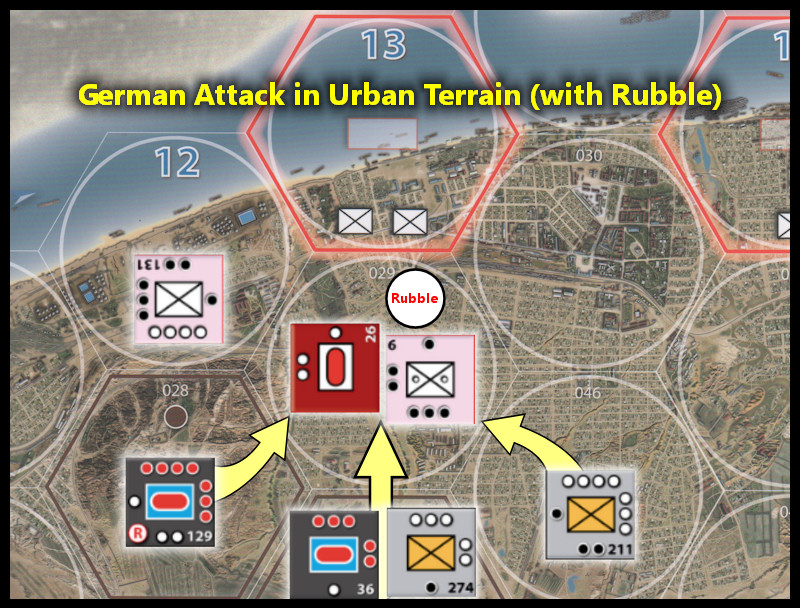 In the later stages of the game, when German units should have moved into the city proper, the battles become more difficult due to the Urban terrain and modifiers such as “Rubble” which may occur due to the pounding of German combat units, Air attack card play, Artillery card play, or even Soviet card play. Rubble effectively doubles the number of hits a unit may absorb by forcing an attack to score 2 hits in order to inflict one (excess hits are discarded). Now, everything is the same as the previous attack description except:

Still not terrible, given the vast firepower quantity and quality advantage the Germans hold. 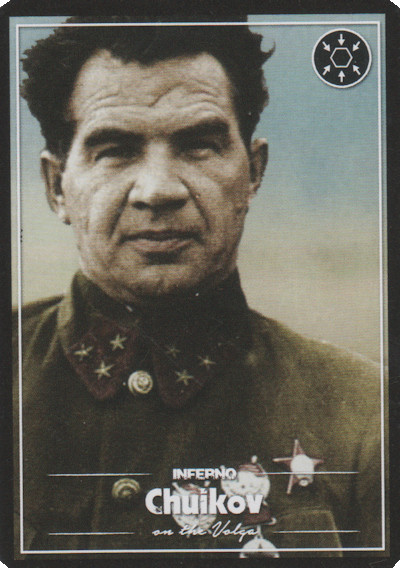 If, at any point during the game, the Soviet “Chuikov” card is randomly pulled, the Soviets may now execute “Opportunity Fire” for the duration of the game. Opportunity Fire allows all Soviet units adjacent to any attacking German units to roll one die (single-fire), inflicting a hit on the attacking Germans if a 6 is rolled on the d6. These casualties are applied *before* the Germans get to return fire. Combat then proceeds as usual, with the Soviet target units (only) firing and inflicting casualties before the Germans can fire. Here’s the story now:

Now the German player is taking hits from everywhere, and the relatively pain-free combat from the clear hexes outside the city is a distant memory. 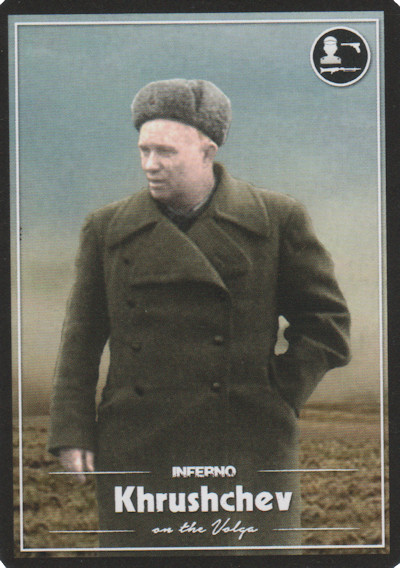 To complete the world of hurt that the Germans will find themselves in, there is the Soviet “Krushchev” card. This card applies a “hit bonus” to every Soviet combat unit (single-fire hits on a roll of 5 or 6; double-fire hits on 4, 5, or 6; triple-fire hits on 3, 4, 5 or 6!). Even Opportunity Fire (from the Chuikov card) is awarded this bonus. Once this card is pulled, its effects last for the duration of the game.

Here’s how the situation will play out with both Chuikov and Krushchev cards in play:

There is a very real possibility of the Soviets scoring 5 or more hits on the German attackers before the Germans can even fire back! The German units can only absorb two, maybe 3, rounds of combat like this before they’re eliminated or ineffective. 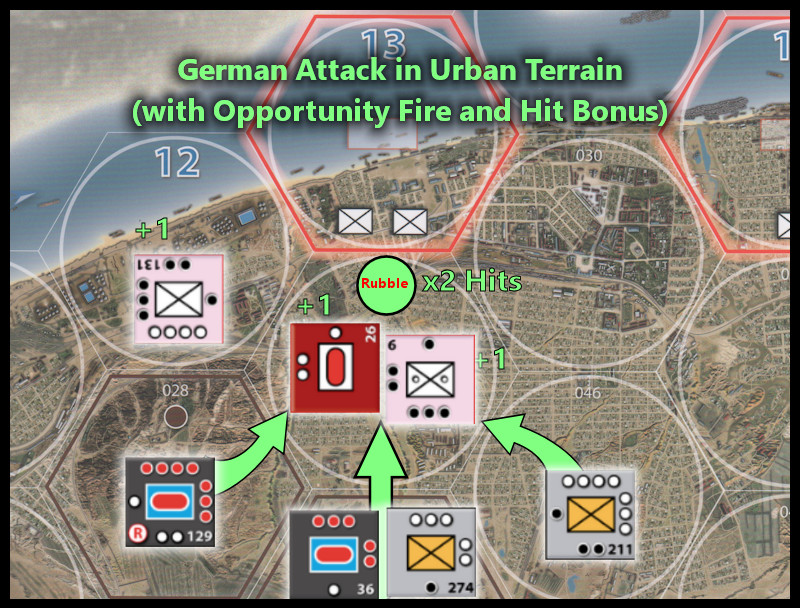 If you already know something about this game and just wanted to skip down to see my opinion, or if you’re just too lazy, errrr… I mean… busy to read the whole article, at least peruse the section titled “How ‘Stalingrad: Inferno on the Volga’ Captures the Historical ‘Feel’, above. It’s important in understanding how my opinion was formed. It describes what you’re up against as a solitaire German player in “Stalingrad: Inferno on the Volga”. I tend to think that the 2nd game I played is more representative of the way this game system was designed to work. But anything can happen, and I wouldn’t be surprised to see something more like my first game repeat itself sometime in the future.

Right off the bat, I’d like to say that one of my favorite aspects of the game is the tremendous replay value. Variability in the setup, Russian AI, and card play makes it almost certain that every game will be different. What if the Soviets pull the “Krushchev” and “Chuikov” cards early in the game? It’s almost certain to be a short night at the gaming table! Conversely, they could be the last two cards in the deck. What if insufficient “Blue” units are pulled randomly out of the German Reinforcement track? Capture of the two southern Soviet Spawn hexes may be fatally delayed.

So, at this point, with only two solitaire games under my belt, I have to say that I’m enjoying the game a lot and am looking forward to playing a third game and will report on that. It’s an exciting game and it’s rare to find that. “Solitaire” and “exciting” don’t often come up in the same sentence (at least in my sentences). There are also a number of optional/additional rules, and modes of play including “The Designer’s Way”, which promise to keep things interesting even after many, many sessions.

FYI: Harvey Mossman and I will be playing a head-to-head game of Stalingrad, probably next week, and we plan to record it and publish the video right here on Grognard.com.