I probably should lead off with the fact that I'm not a computer gamer. I include iPad games, iPhone Apps, PC games, browser-based RPGs, RTS, FPS, and all other related acronyms in my definition of "computer games". I don't own an iPhone or an iPad, preferring instead a Windows Phone and Surface Pro 3. This does not exactly endear me to the latest crop of electronic wargame designers, developers and publishers. I've been standing idly by while a veritable "who's who" of board wargame designers/publishers have begun releasing versions of their classic board games for the various Apple platforms. And creating brand new games as well. Apparently very good games. Every time I've been offered a review or "sneak peak" copy of an electronic game, I usually punt it over to my friend Harvey Mossman, who just loves these things, for evaluation and review.

When Hunted Cow Studios asked me to take a look at their latest effort, Russian Front, I was about to ring up Harvey on speed dial when I noticed something I hadn't seen before. The game's description said "multi-platform". Hmmmm. You mean I don't have to buy an iPad (which ain't happening)? So I loaded it up on my Windows 8 laptop and decided to give it a run-through myself. What's the worst that could happen? I'll waste 3 or 4 hours of my time, get bored to tears... and then pass it along to Harvey. I installed the game and began to play.

While I'm an admitted computer game novice, I am no stranger to war games. And, like many wargamers, I cut my wargaming teeth on World War II games such as "Third Reich" and "Russian Front". There's nothing better than setting up a monster WWII game and trying to change history by outperforming one side or the other. It's really board wargaming at its finest. Having a god's-eye view of the entire theatre of operations spread out before you gives you the "feel" and the flavor of the historical battles being simulated, and a proper sense of the scale at which these events took place.

But that's precisely the area where, in my opinion, computer games have fallen short. Playing on these little devices, you're only seeing a small window of a panoramic scene. I recall Avalon Hill's original attempt to computerize "Third Reich". Scrolling and scrolling to get what I wanted to see in the viewport. Sitting there watching the computer's AI execute moves, the scene jumping from one unit to the next faster than the eye could follow with any kind of comprehension. It was really pretty impressive for the time, given the hardware limitations that existed. But it wasn't a whole lot of fun to play.

Over the years, as development and creative tools have gotten more and more powerful, significant improvements have been made overall. But I think Hunted Cow Studios, with this release of Russian Front, has really found the key to making the experience palatable to traditional board gamers like me.

Russian Front is a 3D Turn-Based Simulation of the cataclysm that was World War II in Russia. Hunted Cow designers and developers have captured the panoramic scene I referred to earlier, and made it totally accessible and manageable via the small screen. The map represents the entire eastern front, from Berlin to Stalingrad. Being 3D, you can rotate the map on X, Y and Z axes for the best possible view of the action. You can pan the map left or right and zoom in or out as desired. What I'm saying is that the whole positional awareness thing that you take for granted when playing a board game is available to you in Russian Front with just a few simple clicks/taps and drags.

The animations are excellent, and configurable. You can control the animations to speed up the game or to slow it down so that, even while the AI is executing its moves, you can easily follow along with action. There are 3 Difficulty Levels; Easy, Normal and Hard (as you might have guessed), that you can adapt to your frustration tolerance :-)

To keep things from getting stale or rote, there are 4 Operation Scenarios that each last for 16 game turns:

Best of all, there are 4 Campaign Scenarios of varying lengths:

The 16 Turn Operation scenarios take about 1-2 hours to play to completion, depending on how familiar you are with the system. The Campaigns, significantly longer. The Campaigns are definitely not designed to be played in a single sitting. With all the variety in scenarios, and all the different possibilities within each scenario, you can count on many, many hours of interesting game play.

The game itself is easy to play. Select a unit by tapping (or clicking) it and you'll see green arrows pointing to all the spaces to which the unit is eligible to move, as well as a flashing octagonal border around all adjacent enemy units it is eligible to attack. The movement arrows take into account movement points remaining on the unit, terrain values, and Zones of Control issues, so you don't have to think about those (if you'd rather not); just click the eligible space and your unit will move there.

Once the unit has completed its movement for the turn, the animated yellow border around the unit will turn solid black. This makes it quite easy to identify units that have not yet moved. 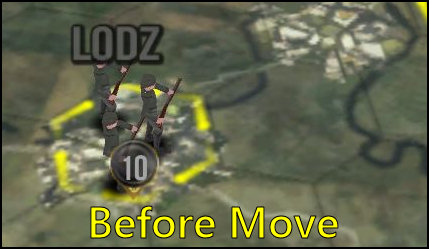 As for combat, it's just as easy. Each unit has four combat strengths:

The single combat strength number that appears directly at the bottom of each unit is actually an average of the above four combat strengths, rounded up.

Select one of your units and wait for the flashing octagonal border to appear around an adjacent enemy unit, indicating it is eligible to be attacked. The unit's averaged combat strength will give you a rough idea if it's a battle you want to fight or not. If you do want to attack, just click the enemy unit once and the Combat Advisor will appear. The Combat Advisor is a predictor of how the battle will turn out, based on unit combat strengths, terrain modifiers and current weather. Keep in mind that these "predictions" can be horribly wrong, but most times should be pretty accurate.

There are some things about the Combat Advisor that are not made clear in the instructions.
Here's what I was able to find out:

If you click the enemy unit a second time, the combat will actually take place. It's a nice feature that gives you a chance to call off the attack after sizing it up with the Combat Advisor. Once you get more familiar with the combat system, the Combat Advisor can be turned off, speeding up the game by only requiring a single click to initiate combat.

Important combat factors, such as Supply, are integrated into the game. A unit that is "Out of Supply" will have its mobility reduced and will be less effective in combat. Each unit also has a Zone of Control (ZOC) that represents control of the areas immediately surrounding the unit. Both Supply and ZOC are standard board wargame measures that have a big impact on simulated combat operations, and they are both represented admirably in Russian Front.

The game's AI appears to be pretty effective. I saw it make some bonehead moves in the "Easy" difficulty setting, but once I notched it up to "Normal", it became a lot more formidable. In the "Hard" setting, it became downright nasty. Never losing sight of the victory objectives, the AI took every opportunity to recapture cities, and did a pretty decent job of surrounding my units in such a way that they were rendered "Out of Supply".

The objective of the game is to score Victory Points by capturing cities. You can win the game by reaching a Target Victory Score, or lose the game by dropping to a Target Defeat Score. The program keeps track of your current score and constantly compares it to the target scores. If neither target score is reached by the end of the scenario, the game is considered a draw. You can see a nice graphic representing your current score by selecting the Timeline at the bottom of the screen. (Note: See the "Con's" list, below, for a small complaint about the Victory/Defeat levels)

Gameplay is smooth and engaging, and the graphics provide the right "feel" for the Russian Front, including the transition to snow-covered steppes in the winters. Speaking of which, a quick heads up to warn you that the Russian Winter is bad news for the Germans in this game. Overall, a fantastic visual experience. 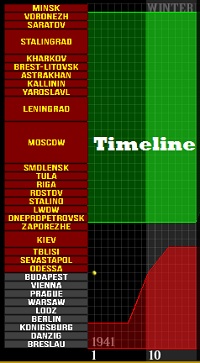 It would be nice if the game offered a one movement "undo" capability. There were a number of times when I accidentally moved a unit and, as far as I can tell, there's no way to "undo" an accidental move.

Remember earlier, when I said "What's the worst that could happen?", figuring on a worst-case scenario of a few wasted hours evaluating the game? Well, it actually ended up being more like 25 hours of "Russian Front" playing time (non-contiguous, of course), as I explored the different aspects of the game. And I don't consider it a waste of time. I'm completely addicted now. Just two weeks ago, I was a contented non-computer-gamer with a good job, a loving family, and a healthy social life. No more.

Crazy hyperbole aside, I enjoyed playing this game far more than I expected I would. The interface is just so clean, intuitive and functional that I was able to get past the learning curve in no time at all, and get right down to the business of developing tactics to beat the game. I can't say for sure that old hands at playing iPad based war games will be as bedazzled as I am at the features of Russian Front, but I will tell you it was a great introduction to the genre and I will be playing it again.

I'm looking forward to moving up to the Campaign Scenarios and expect those to be a real endurance contest. Will probably keep me busy on my morning train rides for the next 3 months...