(Artwork is not final; for development and playtesting only) 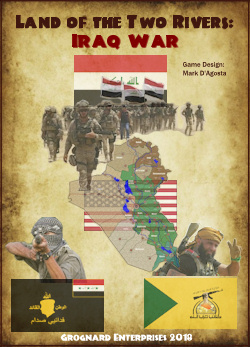 Land of the Two Rivers is a game of the Iraq War in the post-invasion period starting roughly in Spring 2003. By this point Saddam's government had disintegrated and fateful decisions had already been made regarding official U.S. policy towards powerful factions within Iraq. 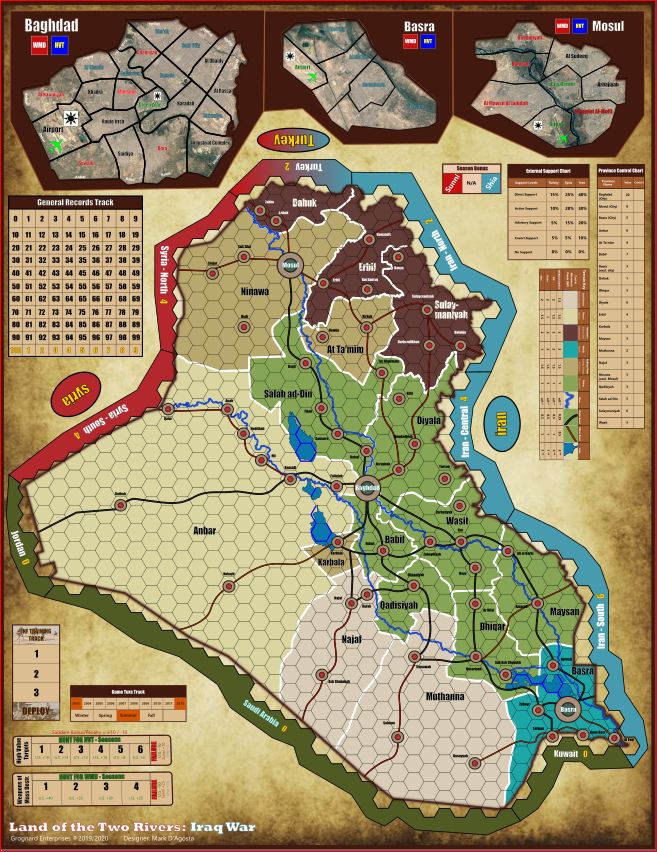 The players are faced with the situation as it existed at that time; the Sunni insurgency was building momentum, the Shia were taking advantage of the chaos to flex their long-suppressed muscle, and everyone was realizing there were insufficient U.S. forces to police the entire country. Regional and global entities like Syria, Turkey, Iran and Al Qaeda were attempting to shift events in their favor.

The game does not provide the ability to alter what had already been done up to that point, but each player has options on how to conduct operations going forward.

The game is designed for three players, representing:

The U.S./Coalition objective is to stand up a new Iraqi army with sufficient strength and effectiveness to control the majority of the country, while retaining only a small number of U.S./Coalition troops in country.

The Sunni and Shiite objectives are to gain control over enough of the population to give them a decisive advantage in the eventual political and ecomonic solution which must one day be achieved.

Players are free to cooperate and make (or break) any agreements they wish. However, there can only be one winner, so ultimately one player must outmaneuver the other two.

Land of the Two Rivers is currently in development. We hope to be able to publish with a large 36x48" map, 5/8" unit counters, and several card decks totalling over 100 cards.

Please contact Mark with any questions or comments about this article.