Ici c'est la France! The Algerian War for Independence 1954-1962 game designed by KIM KANGER and published by LEGION WARGAMES LLC in 2009, is a great alternative to the flood of COIN Series games currently on the market. In my opinion, the FLN (National Liberation Front) insurgency is rendered more palpably than in any of the COIN games. Don't get me wrong, I thoroughly enjoy GMT's COIN Series, particularly "FALLING SKY" and "A DISTANT PLAIN", and I play them often. But in my opinion those games do not provide the "feel" of the conflict they represent, whereas Ice c'est la France! does. The COIN games are more like very interesting puzzles to be solved. If you can make exactly the right moves in the proper sequence, then you may win. Or, more likely, you'll have the other 3 players gang up on you and ruin your (very loose) plans.

Right from the start of the game, Ice c'est la France! has the feel of an insurgency, keeping both players on the edge of their seats for the entire contest. The French player agonizes as he watches the insurgency grow and expand throughout the country, seemingly helpless to stem the tide. The FLN (National Liberation Front) suffer tremendous setbacks and military defeats as they attempt to establish firm presences in populous regions, but have no choice but to continue to feed more men into the grinder if they wish to counter the mushrooming French military forces.

The game is well designed and appears to have been thoroughly play tested. The rules are first rate, as is common with Kim Kanger designs. The graphics and components are excellent and the map and player charts are well organized. I may consider writing a full review once I have a few more sessions under my belt. But this article will discuss the unique concept of TROOP DENSITY in Ici c'est La France!, and suggests tips for the French player to deal with low Troop Density (playing the 1955/Campaign Scenario). One of the things I enjoy the most about this game is the apparent replay value, which is attributable to several factors including Troop Density.

As explained in the rule book there were a lot more French troops in Algeria than what is represented by the physical French units in the game. The rest were regional garrison units and are represented by a marker's current value on the TROOP DENSITY CHART. This value can be a number from 0 (zero) to 4.

Most Regions (areas) on the map have a POPULATION VALUE from 1 to 3. The Troop Density value is added to a Region's Population value to arrive at a Region's GARRISON VALUE, which is used for several reasons. So, generally speaking, the higher the Troop Density level, the better for the French player.

Of the 4 Chits that increase Troop Density, only 3 of them are available before 1957. The campaign game begins in the Winter of 1955, proceeds through 4 seasons (game turns) each year and ends in Fall of 1962 at the latest. As mentioned, the Political Chits are randomly drawn, so there is a possibility that the French player may have to spend the first two years (8 seasonal game turns) of the game with Troop Density of 0 (zero). There are a few drawbacks to having a low (or zero) Troop Density value. In this article we're concerned with the negative impact of low Troop Density on FRENCH ATTACKS.

There are two types of actions the French player can undertake to combat the FLN: COUNTERINSURGENCY and ATTACKS. We will focus on FRENCH ATTACKS. Before the French player can launch an Attack against FLN units in the same Region, they must first perform a successful SEARCH. They roll a number of dice as follows:

The total number of dice are added, up to a maximum of 4 dice, or the number of French units in the Region, whichever is less.

For every die roll of 5 or more, one random FLN unit is considered "found" and can be attacked. (Note: The die rolls may also be modified by Terrain or political status of the Region being searched) But the bottom line is: No successful Search, no Attack. 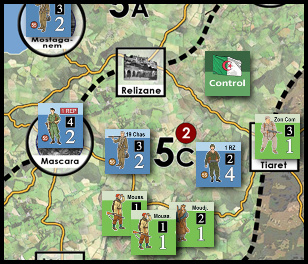 Assuming that your Troop Density Value is zero:

Lady Luck could be in your corner on any given day and you may be able to draw and play several Troop Density Political Chits within the first few seasonal game turns. This will *totally* change the complexion of the early game. A Troop Density level of 2 or 3 will allow that number of Search dice, so the French can engage less units per region and can spread out, perhaps performing more Searches/Attacks. In this case both players would have to adjust their strategies. Hence, the potential for outstanding replay value that I mentioned earlier.

But any time dice are involved, you are operating in the wonderful world of Chance and Probability, so be certain to stack the odds in your favor as best you can. Following the listed Search Tips will help the French player survive the 1955-56 "Low Density Blues".