No war before or after so affected the future course of American history. The Civil War, burned deep into the American psyche, wrought widespread devastation, resulted in unspeakable battlefield casualties, and opened wide the raw wound of Slavery still festering since the acceptance of the Constitution. Perhaps, for this reason, the fascination with battles in unassuming, out-of-the-way locations like Chickamauga, Gettysburg, Kelly’s Ford, Franklin, Port Gibson, Fredericksburg, Vicksburg, Port Hudson, Brandy station, Champion Hill, and Winchester all remain popular topics for historical conflict simulation gaming. There are a plethora of tactical board war games that cover these engagements from various game publishers, but they tend to be large and complex affairs requiring play over many days making it difficult for those who have time and space limitations. Hunted Cow Studios has solved this problem with their beautifully crafted game available for iOS and Mac OS, the Civil War 1863.

You are put in command of either Union or Confederate forces at the tactical level. You’ll be maneuvering your infantry regiments, cavalry squadrons and artillery batteries across the battlefield with an eye to unhinging your opponent and routing him from the field. The game covers the crucial battles during 1863 which most people consider the turning point of a war that seemed to drag on endlessly in inconclusive stalemate for the first 2 years.

There are 10 different campaigns you can play through at 3 different levels of difficulty including Casual, Standard and Hard. All the actions depicted occur in and around the major battlefields of 1863 and although the scale of the game does not allow you to play out the whole of the larger battles, the parts the battle Hunted Cow Studios has selected allows you to focus on the critical points that could have turned the tide in the bigger picture. 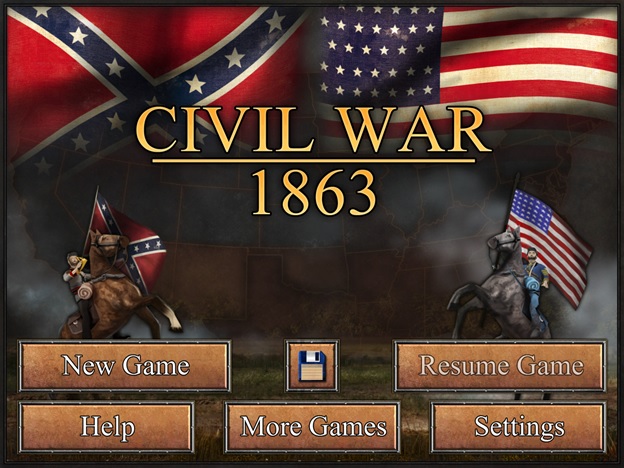 For those of you familiar with Hunted Cow Studio’s games on the ancient era, and World War II, you will quickly recognize familiar elements. The opening screen allows you to set up a new game, get help with the tutorial, load saved games, Resume a game in progress or adjust music and sound effects by toggling them on or off. When you start a new game you can play as either the Union, Confederate or make it a 2 player game. There is easy access to the rules of play by tapping on an icon in the right lower corner.

The beautifully depicted map has a hexagonal grid overlaid typical of paper and cardboard wargames and includes woods, hills, wooden and stone buildings, fences, stonewalls, roads, rivers, bridges, stockades etc. which serves to impede movement and/or offer protection from enemy fire. Terrain also can obstruct line of sight but the computer handles this simply by showing you where you are allowed to fire when the unit is selected. Overall, units have a limited line of sight and shaded hexes (which are out of friendly view) may hide enemy units so proper reconnaissance is important to avoid nasty surprises. It is not unusual for friendly units to march up to a given piece of terrain only to be nastily repulsed in close combat by a hidden enemy. 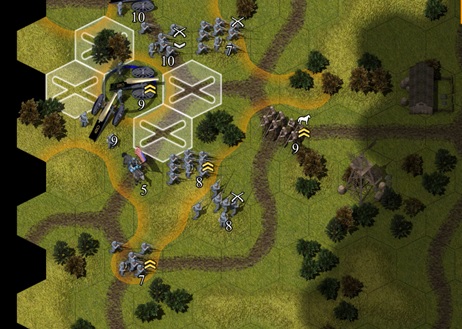 The interface is very elegant. Simply tap on a unit you wish to move. This outlines hexes where the unit can potentially reach and shows shaded yellow hexes to which unit could potentially fire. Enemy units tinted orange are potential targets and can be attacked by hitting the appropriate icon in the upper left corner for musket fire or melee. 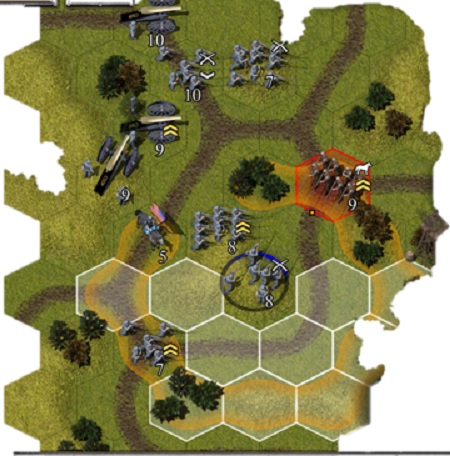 The combat animation is wonderful. When units are firing you see and hear them cock their muskets and let loose a wall of minnie balls. When they melee, you see them charge forward and fight until one unit is left standing their ground. Artillery roars to life firing 12 pound projectiles at the enemy.

Units include smoothbore and rifled musket armed infantry, mounted and dismounted cavalry, artillery, gunboats, generals and supply wagons. Infantry can be in one of 3 formations: Line which is the most effective for firing but slow in movement, Column which makes movement faster and is more effective in melee and Unformed which is the least effective fighting formation and occurs automatically whenever units enter or cross obstructing terrain. Units can also become involuntarily unformed as a result of combat. Cavalry can be either Mounted (which prevents them from firing but allows them to charge into melee) or Dismounted in which case they act like infantry. To change the unit’s formation, simply highlight the unit and hit the upper left Formation Icon. It is important to note that the unit may not move or shoot after changing formation.

Units are rated for their combat strength (from 1 to 10) and level of training, either Raw, Average or Veteran. Obviously, the lower the quality your unit, the less likely it will effectively fire and the more likely to refuse to charge or stand against a determined foe in melee. Therefore, players must know their unit strengths and weaknesses regarding quality and weaponry to be effective. In fact, good play requires the players to balance unit quality, weaponry, maneuverability and proper utilization of formations to achieve victory. 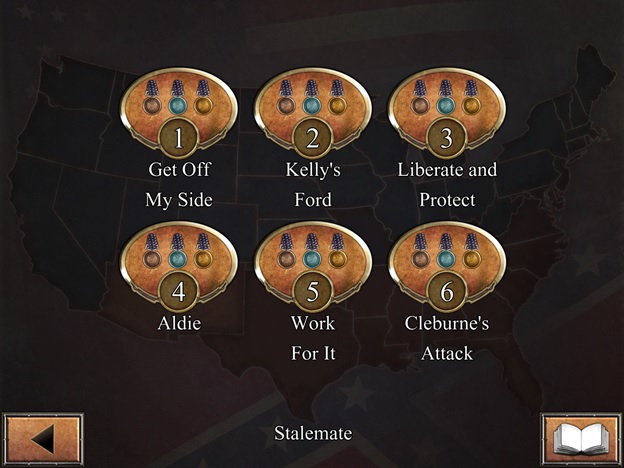 Scenarios can usually be played in 15 to 30 minutes. Each scenario gives you a mission to accomplish which usually includes holding or capturing specific terrain objectives called Control Points or inflicting a certain amount of losses on your enemy before you reach your own casualty limit causing your army to rout. There seems to be an endless variety of missions including meeting engagements, reconnaissance in force, set piece battles, rearguard actions, desperate defenses and counterattacks. Since you can play at 3 different difficulty levels and take either the Union or Confederate side, replayability is extremely high.

If there is one quibble I have with the game it is that there is no depiction of individual unit morale. Units will fight to the death although they become progressively less effective as they take casualties. However they never rout from the field nor are adjacent units ever affected by their elimination. There is no mechanism for panic contagion.

Overall, Civil War 1863 is another fantastic entry by Hunting Cow Studios in a growing line of elegant historical war games for the iPhone, iPad and Mac OS. Beautiful graphics, a user-friendly interface, historical accuracy and tremendous replayability make this one of the best values you will ever find!