Blocks in Afrika: The Mediterranean Campaign 1940-43

from Noble Knight Games!
Buy "The Path to Victory"

Right Out of the Box

Blocks in Afrika: The Mediterranean Campaign 1940-43 is an operational level World War II game that covers the entire Mediterranean theater of operations from 1940 to 1943. It is advertised as being most suitable for 2 players, as well as having good solitaire suitability. The game was designed by Emanuele Santandrea and published by VentoNuovo Games.

I enjoyed VentoNuovo's Blocks in the East very much although I found the map to be very congested as the unit density is quite high. Blocks in Afrika should present an entirely different situation, so I expect to be happier about the "map-crowding" situation, although there are 200+ blocks in this game as well. The map and all the components are first rate as expected since this type of quality has become a hallmark of VentoNuovo's creations.

I just got the box opened yesterday, placed the stickers on the blocks and had a bit of time to peruse the rules, so I'm nowhere near ready to write up a complete review of the game. But I did want to publish some first impressions and some player aids to assist with getting the game set up and ready to play with the least amount of effort. I'm not an "unboxing the game" kind of guy but I think this may be helpful to proud new owners of Blocks in Afrika.

The guys at VentoNuovo are definitely well versed in World War II skirmishes, battles and campaigns. They can probably recite Orders of Battle in their sleep. Unfortunately, I cannot. Therefore it was with much trepidation that my eyes wandered over the "sticker sheet". I recall from Blocks in the East that the design and color scheme follows some definite logic but, as I said, it's not immediately apparent to me. They know their unit designations inside and out. Me?... not so much.

I wanted to see just how long it would take me to affix all the stickers so I kicked off the timer and waded right in. After staring blankly at it for about a minute, I decided that it would be best to have a look in the rulebook to see if there was a color-coded unit manifest. Bingo! Right on page 3, under "Game Components", there's a list that displays the number of blocks, the color, and the associated nationality (1.2 Unit Counters). I decide to start from the top of the list, where the first item is "3 Axis Forts: Orange". I saw the 3 orange blocks in the bag, but could not quickly determine which of the stickers were Forts. Fine. So I moved on to the next list item "15 French Units: light blue".

The French list showed a lot more promise. I was able to see about 15 stickers that had French flags on them. Great! So I put those units on the light blue blocks and moved on. The next item on the list is "29 German Units: black". But I didn't see 29 units on the sticker sheet that I could positively ID as German. Next was "22 Italian Units: light green", and I saw a lot of light green stickers. More than 22 unfortunately, so I could not place the Italians either.

At this point, I wisely stopped and read the rules a bit further where I saw a reference that said "for more details, see the complete list of units on..." and referenced a link on BoardGameGeek. So I went there and found the referenced sheet. What they did was to use colored magic markers to circle groups of units with the color of their associated blocks. This is where I found out that my decision to put all units with French flags on light blue blocks was a mistake. Actually the French naval units should be placed on white blocks, along with all the other "Western Allies Naval Units".

So, the point is: unless you're a WWII OB expert, don't try to "wing it". You're bound to screw up. Especially when you try to identify the various "Minor Powers" units to put on the brown blocks. But I also felt that the reference sheet could have been done better. So I created my own player aid. 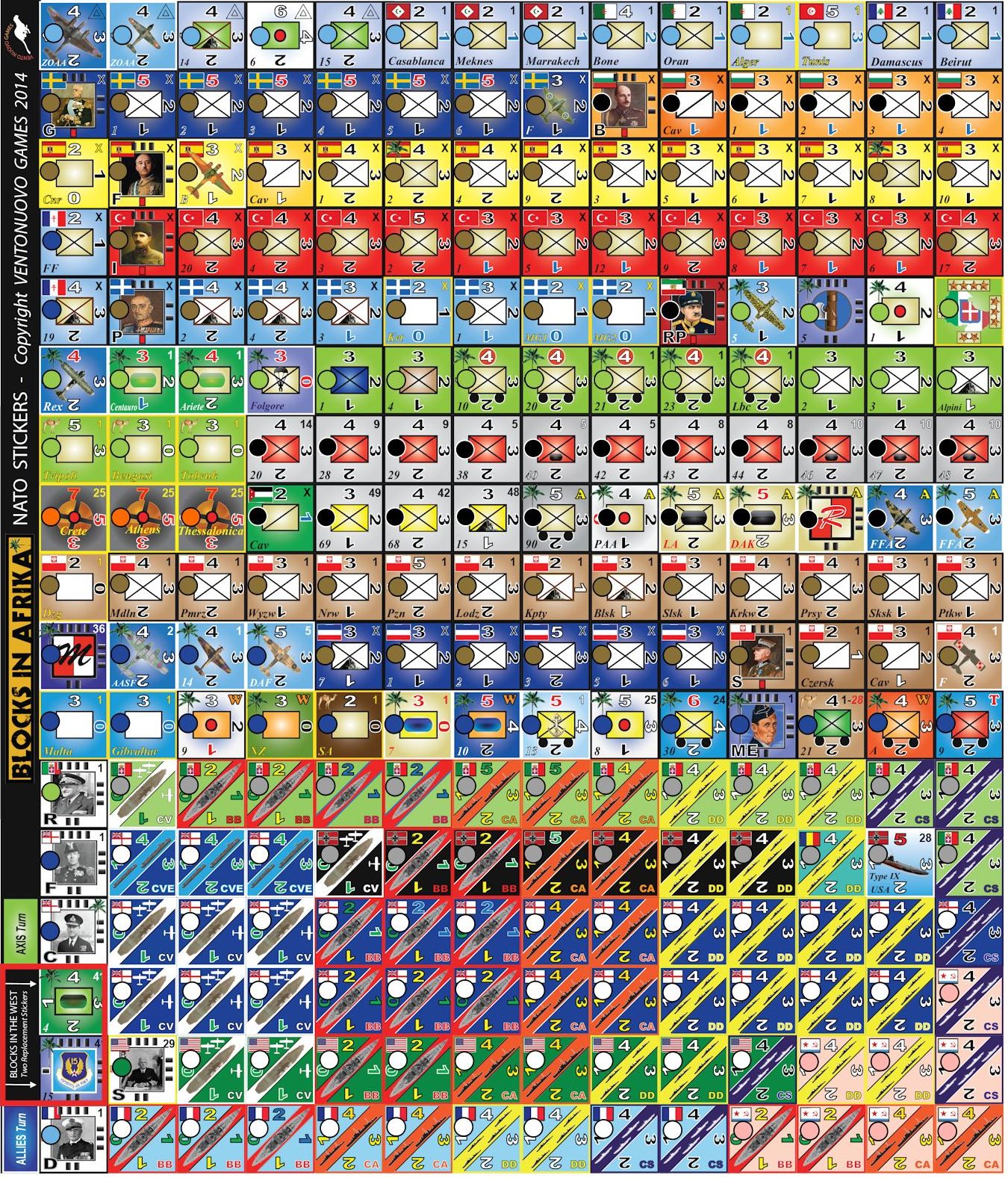 On my sheet, above, I put a colored circle on the left side of every unit on the sticker sheet so there can be absolutely no confusion as to what goes where. For example, a white circle instructs you to affix that sticker to a white block. Only the two units that are replacement stickers for "Blocks in the West" are not coded because they are not used in Blocks in Afrika (they are outlined in red on my player aid). Follow along with this sheet from top to bottom and you'll be done in about 40 minutes (it took me just under 42 minutes, but I'm slow)... oh, and you're welcome.

The combined game scenarios look truly amazing, but at this point I'm merely interested in playing Blocks in Afrika standalone, so I won't even discuss them yet.

The Blocks in Afrika Rules Manual contains all the rules of play for the basic game and the advanced game as well as the scenarios that you'll need to reference. The one player aid card that you need is titled Blocks in Afrika Charts and contains quick reference info for the Turn Sequence, Combat Sequence, Production, Tactical Symbols and Unit Classes. It also shows a full Development Chart fr the various Tech Levels. The reverse side of the player aid contains the terrain chart which includes graphical examples of each of the terrain types, as well as movement cost, attacker and defender modifiers and special conditions for each. 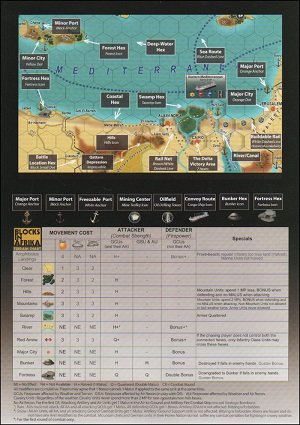 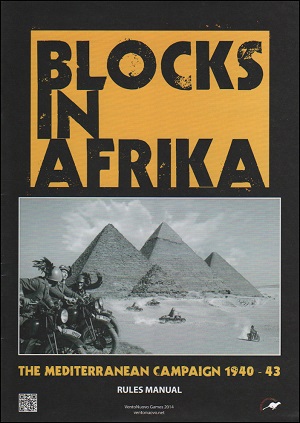 So, for now, put all the non-essential booklets and charts back in the box; you don't need them yet. 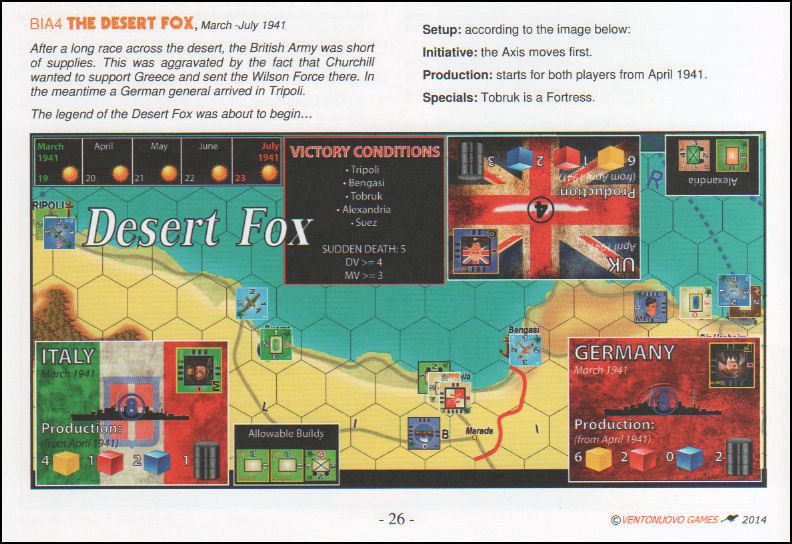 As you can see there's a good variety of scenarios, which can be chosen depending on the amount of time you want to spend playing. The Naval Battle Scenarios only use the game's Naval Rules, which can be incorporated into any of the larger, combined game, scenarios. 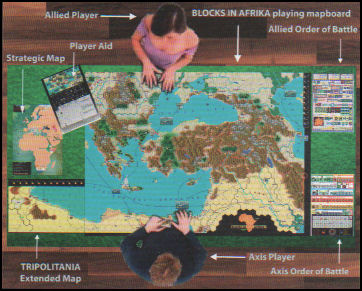 The Blocks in Afrika maps are absolutely beautiful! They cover from Tripoli to Basra along the southern edge, and Budapest to Astrakhan along the northern edge. All of Turkey is included as well as Greece and most of the Balkans. In addition to the main map (24" x 34") there is a smaller extension (8" x 11") called the Tripolitania map. Both maps are esthetically pleasing as well as durable. They look like they will hold up well to repeated use and folding. When combined with the Blocks in the East, Blocks in the West and Strategic maps (see picture), the full map layout is a thing of beauty.

The publisher, VentoNuovo Games, is very serious about this series and it has been a labor of love for designer Emanuele Santandrea for quite a few years now. He lives and breathes this series and, while you may or may not like the game depending on your preferences, you cannot say that he does not support the game fully. He is always willing to clarify a rule or explain the logic behind the game's mechanics. Lack of designer/publisher support will never be a reason for not playing this game.

You can find an "unboxing" video (two videos, actually) on the VentoNuovo web site (if you don't see them on the main page, search for "Blocks in Afrika unboxing video"). There's a total of about 50 minutes of video that provides a ton of information about the game and the components. For new Blocks in Afrika owners, it's time well spent.

I'm going to do as suggested in the rule book and play each of the scenarios twice: once with the basic rules and once with the advanced rules, before attempting any of the combined game scenarios. I look forward to many hours of entertainment with my "blocks"... this time in Afrika.