“Hannibal ad portas” (“Hannibal is at the Gates!”), the Roman senators cried, such was the psychological impact of Hannibal’s campaigns in Italy during the 2nd Punic war. Counted among history’s greatest generals, Hunted Cow gives you the opportunity to step into Hannibal’s sandals and strike fear into the hearts of every Roman with their newest addition to their iPad wargame line, Ancient Battle: Hannibal.

For those of you not familiar with Hunted Cow, they have been making wargames for the iPad for several years now with titles that span the Ancient Era, American Civil War and World War II. Their latest work in the Ancient Battle system follows proudly in this tradition. This game draws you back to an era when war was personal and bloody, a magnificent spectacle and colorful contest between units so diverse that it is unimaginable they were all collected on the same battlefield. And indeed, Hunted Cow made sure everything is here: Balearic slingers, Cretan archers, light, medium and heavy cavalry, Numidian Calvary (both light horse spearman and heavy cataphracts), Gallic medium infantry, Spanish heavy infantry, Carthaginian mercenaries, Phalanxes and of course, Elephants!! Roman units have wolf skin wearing Velites, early Republic legionnaires, Auxiliaries, Roman artillery (Onagers, Ballistae and Catapults), and Supply Wagons to name just a few.

All of the battlefields include beautifully rendered hills, woods, rivers, bridges, roads, paths, rough terrain, Carthaginian and Roman camps, trenches and stockade fortifications. The beautiful graphics magnificent background musical score and historical attention to accurate unit depictions creates one of the most stunning simulations I have ever laid eyes on. 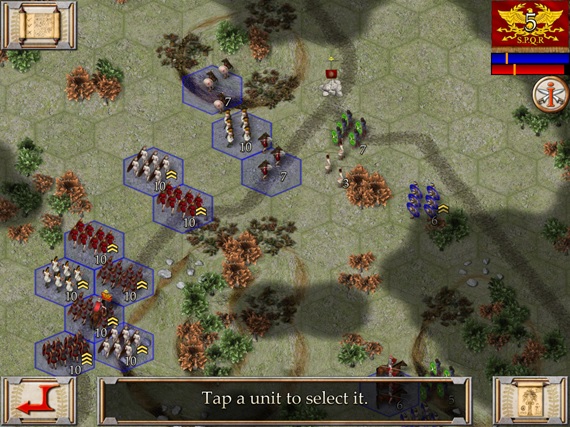 But all of this would be for naught if the game was not challenging and easy to play! Hunted Cow provides a very straightforward interface that is intuitive and makes playing the game a pleasure. In the upper left-hand corner is a scroll icon that allows you to review the victory objectives of the scenario. In the upper right- is a parchment that shows the current game turn and beneath this, blue and red bars that depicts the relative strengths of both armies. The lower left icon allows you to advance to the next turn, at the bottom of the screen is a message area that gives currently selected unit statistics. An icon at the lower right brings you to a menu that allows you to access the rules, close the game, surrender, save the game or modify the settings.

Most of the display real estate depicts the map and the units. This is scalable with the iconic iPad pinch. Units that have not yet moved have their hex highlighted in blue. Simply tap on a unit and all its possible moves are highlighted in white while opponents that it could potentially attack with either missile fire or melee are highlighted in orange. Now just tap on the hex you want to move to and your unit will take the simplest path to that destination. If you would like to launch slings, arrows or spears, just tap on the enemy target, then tap on the Bow Icon and you will marvel at the beautiful animations of Skirmishers swirling their slings around their heads and launching rocks at the enemy, Archers drawing their bows to unleash a hail of arrows or Spearman drawing back their arms to hurl their deadly weapons.

Each unit is depicted with a manpower strength rating from 1-10 as well as an experience level, Raw, Average, Veteran or Elite which are anachronistically depicted by using brevets. Nonetheless the information is clear and accessible thereby easing gameplay. 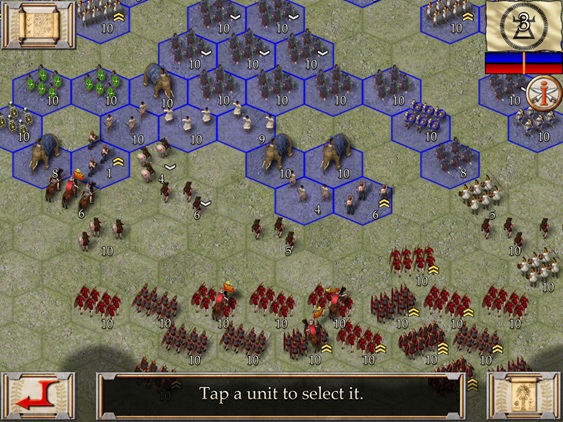 Melee combat is perhaps the most nerve-wracking moment in any warrior’s life but, once again, Hunted Cow’s intuitive interface makes the process as stress-free as possible. Simply tap on your friendly unit and then its intended target and your unit will charge to an adjacent hex to make its attack. If more than one target is within range, arrows will appear for you to select which target you would like to engage. It could not be more straightforward or simple.

All combat is brilliantly animated and will usually result in losses to both sides unless you are firing missiles from a distance. For those interested in the computations of combat results, you can toggle on the Combat Analysis Icon which shows you all the factors modifying the combat results including terrain, unit experience, flank and rear attacks, leadership modifiers etc. As for me, I love to just launch my units into the fray using common sense knowledge of how different factors interact. The best generals try to wear opposing units down with missile fire before launching heavier shock troops at their opponent. Missile armed skirmishers or cavalry are best utilized by darting in, launching missiles and then running away. Indeed skirmishers and light cavalry will automatically retreat before heavier charging opponents making them difficult to catch in shock combat unless enveloped by multiple units. General’s mainly give morale bonuses to adjacent friendly units and can provide an even bigger bonus if embedded with a particular unit.

The scenarios span four theaters of the war including Spain, Italy, Sicily and Africa. In Spain, Carthaginian generals Gisgo, Hasdrubal, and Mago fight through 7 scenarios against a variety of Roman consuls including Publius Scipio and his son, later to be anointed as Scipio Africanus. The Italian theater has the most chronicled and famous battles of the war including the disastrous defeats of the Roman army at Trebbia River in 218 BC, Lake Trasimene in 217 BC and of course, Hannibal’s most famous victory at Cannae in 216 BC. There are 4 scenarios in Sicily and 5 scenarios in Africa culminating in the climactic battle of Zama in 202 BC where Hannibal meets his match in Scipio Africanus and, with this crushing defeat, soon ends the 2nd Punic war. 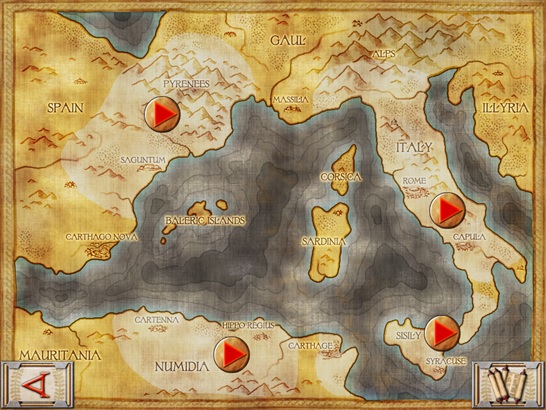 Each scenario can be played as either the Roman or the Carthaginian player at 3 levels of difficulty, Casual, Standard and Hard. When first playing the game, you must play the scenarios in each theater sequentially in order to unlock the next. Once all are unlocked, you can freely play any of them. The depth and breadth of scenarios is astounding comprising meeting engagements, swirling cavalry battles, set piece linear engagements, forced river crossings, attacks on enemy camps and fortification assaults. With 24 scenarios, at 3 levels of difficulty and the option of switching sides, you potentially have 144 varying engagements making replay value extraordinary!

Victory is usually determined by occupying control points on certain important geographical features, and their occupation often brings friendly reinforcements to the battle. Other victory objectives require inflicting a high percentage of enemy casualties while not bloodying your army to extremis. Some scenarios demand that your Army simply survives intact for a designated number of turns. All the scenarios are different and challenging requiring proper appreciation of unit capabilities and coordinated combined arms tactics.

It is obvious that Hunted Cow has taken the time to do the historical research to provide insight into ancient era combat. The simple, intuitive interface, astounding graphics and extraordinary replay value means Ancient Battle: Hannibal will occupy a place on my iPad for a very, very long time!